To understand Dutch oven sizes, one needs to recognize the individual needs you fulfill when selecting one. And more to the point, where you’ll be using one.

When I think about prepping and what may happen in the future, when a disaster does finally strike, it’s that image of the open fire that surfaces. The thought of my family all safely tucked around an open fire, the camping Dutch oven slowly simmering our meal while we silently reminisce.

Isn’t that image what prepping is all about? Aside from that instinctual survival streak we all have, it’s also the thought of having our family safe after a disaster. 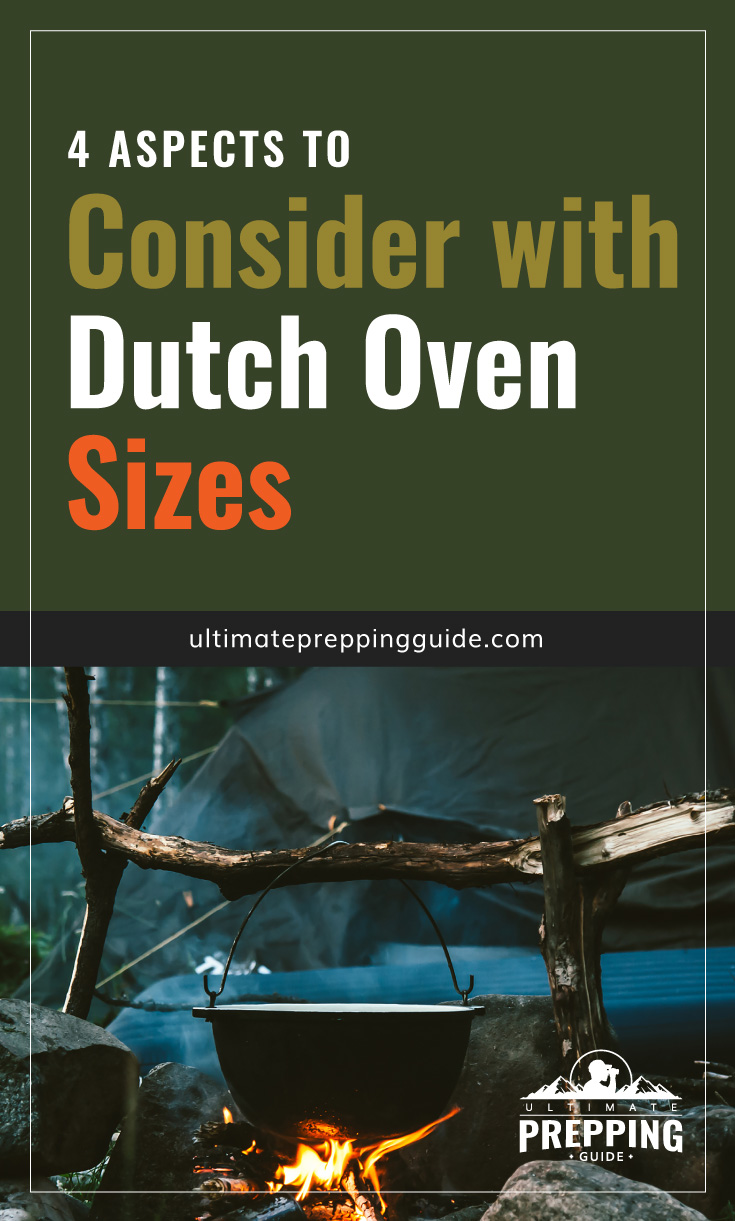 The Dutch oven is the perfect tool in my kit, one that I highly recommend.

While it might not rank as high as some other more essential items, like emergency water rations, food, and medical supplies, it still is one of those items that serve more than one purpose.

That is if you see bonding, entertainment, and survival as ranking amongst important roles.

The Dutch oven for me is the thing that draws the family together. It has the power to hypnotize people with the smells of the food it cooks, attracting the curious to sit nearby, maybe gazing into the flames as their minds wander.

Or, you could just see it for what it is, a pot made to sit on a campfire. But that description doesn’t do it for me, too brief for a tool perfect for post-disaster necessities.

What is a Dutch Oven?

Put simply, a Dutch oven, not to confuse with certain ‘slumber activities of mischievous people and blankets’, is a thick-walled pot with a tight-fitting lid that traps heat inside it. Some English-speaking countries call Dutch ovens casserole dishes, but they both essentially mean the same thing.

The humble Dutch oven was born over 300 years ago and has undergone several changes over the years. While some had longer legs to allow them to better stand above the coals of an open fire, they generally remained fairly similar in purpose.

There’s also the camping variety, now commonly called the camp oven, cowboy oven, or even chuckwagon. But they are all still essentially Dutch ovens.

They consist of a heavy-set pot with thick walls and base, combined with a substantial lid that seals the air inside. Some lids also double as girdles when flipped upside down.

Dutch ovens come in a number of different materials, although cast iron, aluminum, and ceramic are the three most common. Camping ones tend to be more of the cast-iron variety. Some cast-iron Dutch ovens are seasoned, while others tend to be enameled, especially when used more indoors.

When selecting between Dutch oven sizes, decide whether you’d prefer one for outdoors, to use on an open fire, or an indoor one. People use indoor ones more on stove-tops and ovens.

I tend to buy seasoned cast iron ones that I use both indoors and outdoors. I’ve even been known to use mine over my indoor open fire, right there in my living room.

Make no bones about it, Dutch ovens come in a large number of varieties. Whilst there is a large Dutch oven, there’s also a tiny one; a camp Dutch oven, and a kitchen one.

But there doesn’t have to be any confusion when it comes to choosing your own. Because there’s a Dutch oven made perfect just for you.

If you are definitely unsure of what size to buy, there’s one general rule of thumb I always stick to when selecting my own. Every quart feeds a person. As I said, it’s a general rule and one that mightn’t suit everybody.

But you know your own family better than anybody, so if Uncle Hank eats enough for 2 people, counts him as 2. Another good idea is to over-estimate. Better to have too much food than not enough.

So, if you have a 6-person family, I’d suggest a 7 to 8-quart Dutch oven. If it’s just you and your better half, maybe a 3 to 4-quart model. In any case, the size is more about the maximum capacity.

Buying a 12-quart Dutch oven doesn’t have to mean you fill it to the brim every single time. It just means you have enough room in case anyone decides to drop by unexpected.

The 4 Aspects of a Dutch Oven

When shopping for your next Dutch oven, there’ll be a number of descriptive numbers that summarize the different sizes of your oven. While some will include all, others may only mention one or 2 of them. They aren’t hard to figure out, but in case you need to understand them, here they are.

There will also be Dutch ovens of differing sizes, some deeper than others while not as wide. But the general numbers seem to encompass the majority of them

To compare some of the numbers against what you might choose for your family, consider the following. Remember, they are only meant as a guide.

The bottom line will be whether you’re buying for yourself or for possibilities. I personally have 4 Dutch ovens, each with their own purpose. But there’s no denying that regardless of what happens, one of them will always sit above the flames of any campfire I build, regardless of the circumstances.

One brand that always sits well with Dutch oven purchasers is Lodge. Lodge Dutch ovens come in a variety of flavors, each as distinctive as your needs. The reviews on this brand of ovens are extremely favorable, showing just how popular they are.

There should be room for a Dutch oven on any prepper’s list, not just to keep the stew warm. They serve so much more of a purpose and for me, will always have a reserved spot. When building your own list of specific items you’ll need, consider one for yourself. I promise you won’t regret it.

The only final thing I will mention about Dutch oven sizes is to consider whether you’ll be bugging out or staying in. Because Dutch ovens weigh a considerable amount, especially the larger models, maybe think about buying a smaller one for your bug out bag.

Whilst big enough to cook enough for 2, they weigh just enough to make them part of your kit without going too far over.